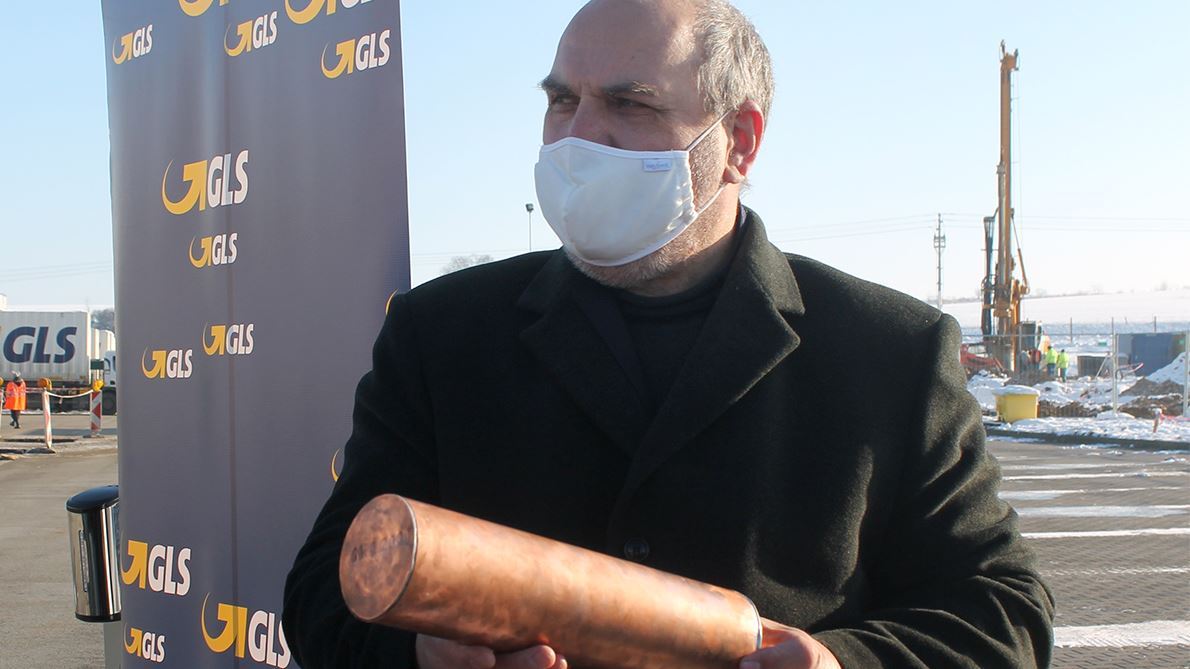 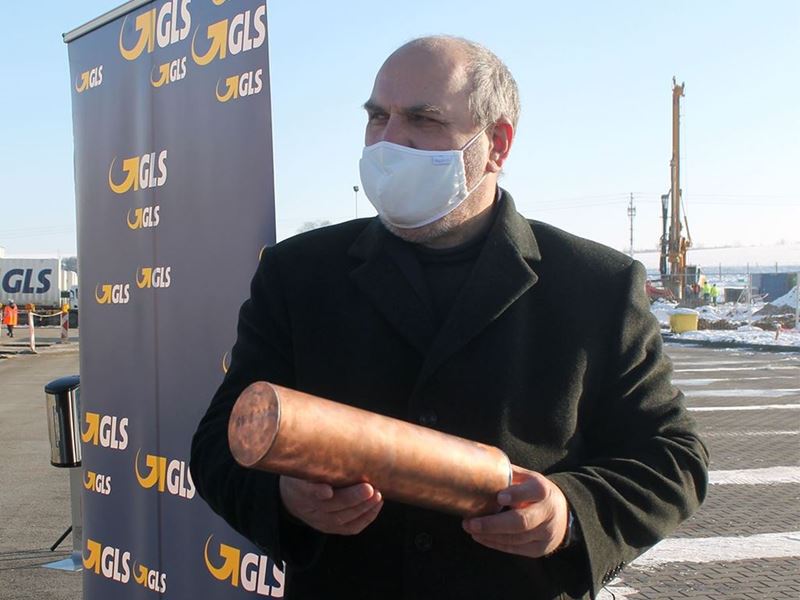 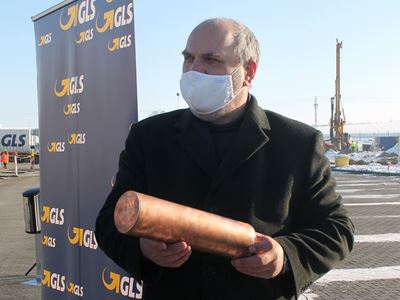 Pavel Včela, Director of GLS Czech Republic, with the copper box containing a message for future generations in Jihlava.

Prague, January 11th, 2021. In response to the extreme growth of e-commerce in 2020 and the record number of parcels transported in the main season, the parcel delivery company GLS Czech Republic accelerated the planned expansion of the national and international sorting centre in Jihlava. The new hall with an area of 4640 m2 will meet environmental standards and will increase capacity up to 2.5 times. The investment in the first stage, which will make it possible to process 50% more consignments during the peak season 2021, amounts to EUR 12 million and brings up to 100 new jobs. In the presence of state officials, the first column of the hall was erected in Jihlava today.

The year 2020 will go down in history not only as a coronavirus year, but also as a year of a massive transition to online life around the world. E-commerce and related parcel transport proved to be an indispensable part of the infrastructure at a time when the stores remained closed due to government regulations. GLS Czech Republic responded to the expansion of e-commerce by expanding the hub in Jihlava. The first column of the hall was ceremoniously erected today with the participation of the President of the Senate Miloš Vystrčil, the Governor of the Vysočina Region Vítězslav Schrek, the Councilor of Jihlava Martin Laštovička and a representative of the Chamber of Commerce. The column also includes a copper box containing a message for future generations and describing the time in which this building is being built.

"We are glad that many brick-and-mortar stores and small tradesmen managed to enter the world of internet sales with our support. The high-quality and robust GLS network easily handled the extraordinary demands of the number of B2C shipments, the maximum of which reached more than double 2019. In order to be able to meet customer requirements, we began construction of the next stage of the international sorting centre in Jihlava. Start of operation is planned for autumn of 2021. The entire sorting centre is being built with maximum use of sustainable development practices and will continue to benefit the development of business in the region and the employment of its inhabitants," says Pavel Včela, Director of GLS Czech Republic.

“The investment in the hub, which in the first stage will reach EUR 12 million, will bring other benefits to the GLS transmission network by further increasing the international importance of Jihlava, which already has daily direct connections with nodes in Germany, Austria, Poland, Slovakia or Hungary”, adds Pavel Včela."The construction of the new hall will increase capacity by 50% at this stage, in the future it will be up to 2.5 times the existing capacity. Thanks to the expansion, up to 100 new jobs will be created in the region,”

The entire building will also meet GLS environmental standards. "Heat pumps will be used for heating, thermal insulation will be strengthened, rainwater and LED lighting will be used. The building will have a green facade and will also meet the conditions for the future use of emission-free vehicles or the use of the roof for photovoltaic panels,” explains Pavel Včela.